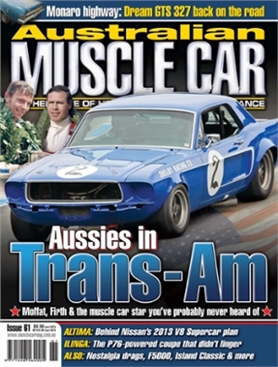 MUSCLE NEWS  Paul Gover on the securing of Holden's immediate manufacturing future. Ford's four-pot Falcons, exports and engineering recruitment drive. James Cockington delves into his pop culture treasure trove. MUSCLE MAIL This issue, readers recall: the McGrana Torana towing marathon, Wellington street races and classic Chargers. COLUMNS  welcome serial muscle car owner Phil Anders to the mag. JB heads back to Longford. AUSSIES IN TRANS-AM  Parnelli Jones called it ‘the greatest road racing series ever run in the States’. MOFFAT & FIRTH  Did you know they were once co-drivers in Trans-Am? HORST KWECH  Paul Newby tracks down the muscle car star from Cooma NSW, who's a Trans-Am legend in his adopted country. HISTORIC TRANS-AM  History can repeat itself: witness the swag of original Camaros, Javelins and Mustangs running in the USA's Historic Trans-Am Series. TRANS-OZ  Australian Trans-Am Championship organisers are going all out for bigger and better things in 2012, the tribute category's fourth season. NISSAN IN V8s AMC's an intriguing insight into Nissan's rationale for returning to the top division of motorsport in Australia. MUSCLE MAN  behind the scenes of 'Hollywood' George Elliot's amazing half-century of non-stop action, on and off the track. NOSTALGIA DRAGS  David Cook takes us back to a time when racing was simple, cheap and fun and discovers it still is! ILINGA  Ill-fated, or simply ahead of its time? ISLAND CLASSIC the cars and characters at Australia's biggest historic racing event, on Phillip Island. BACK IN THE DAY  With the Formula 5000s making their thunderous debut at this year's Muscle Car Masters, AMC revisits the 1975 Tasman Series and a unique Australian victory. MODELS  Bondy's Torana. OUT OF ACTION  Anyone in the market for a HK Monaro GTS 327? MIA  We've found the Volvo from Bathurst 1979. Uno, the little Fiat that raced in '86? We've found that too.